LAS VEGAS -- One more day until Larry starts to play. We finally figured out the best way to drive over to the Rio and park. And then we found a pretty good vegetarian restaurant in Las Vegas's Chinatown section, right nearby. 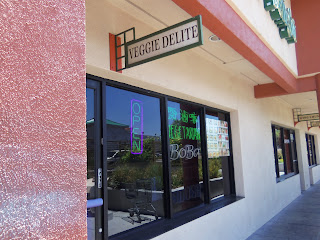 We've thought a lot about what to eat and where to eat once Larry starts playing since we're vegetarians and kinda picky. It turns out that the Rio convention center has been set up to sell more than Red Bull and beef jerky (although they do have those) for the poker masses. This is a stamina event, after all, so the convention center must know that people seemingly do want to eat well. 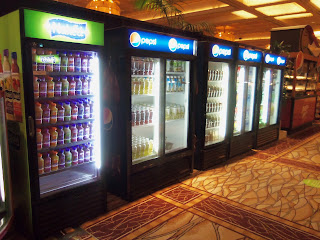 Not much fried food, if any. Quesadillas and noodle dishes and sandwiches and sushi. Bottled waters and Naked juices. And there's a smoothie bar, too, with smoothies made from fresh fruit, not flavored mixes. A bottled water is $5.

When we arrived at the Amazon room today at around 1 p.m. -- the room where Larry will be playing tomorrow (and the room where the featured table resides) -- the first thing that hit me was how quiet it was. In that enormous room with hundreds of poker tables and thousand of players and press and lookie-loos like us, the only sound was the clicking of poker chips. It was still the first round, with no antes yet and the blinds just 50/100. So people were still just settling in.

But at 2:00, it was time for a break. One of the craziest parts of this whole thing is that everyone has a break at exactly the same time. For those 20 minutes, as a couple thousand players who have been sitting for 2 hours rush out the door, the line for the men's room is all the way down the hall, and it's almost impossible to get through a sea of mostly 20-40-something-year-old guys.

That makes me think about the women who are playing. My rough eyeball estimate is about 3/100 players are women. Not nearly as many as my estimate of 25/100 of players wearing hats.

And the room isn't cold. It's really comfortable, so my theory about hoodies as a way to ward of the cold isn't true.


*
We were out in the hall just after the break. Most people had gone back in. All of the sudden, we heard the national anthem being played in a different room where other WSOP tournaments were going on (there are many more smaller tournaments during the Main Event). Turns out that the winner of one of those tournaments was from the U.S. So it's kind of like the Olympics:  they play the national anthem of the winner's country.