SQUIRREL HILL -- While waiting for a clarinet/guitar/accordion performance at the Christine Frechard Gallery in Squirrel Hill, I took a look at some of the art for sale: 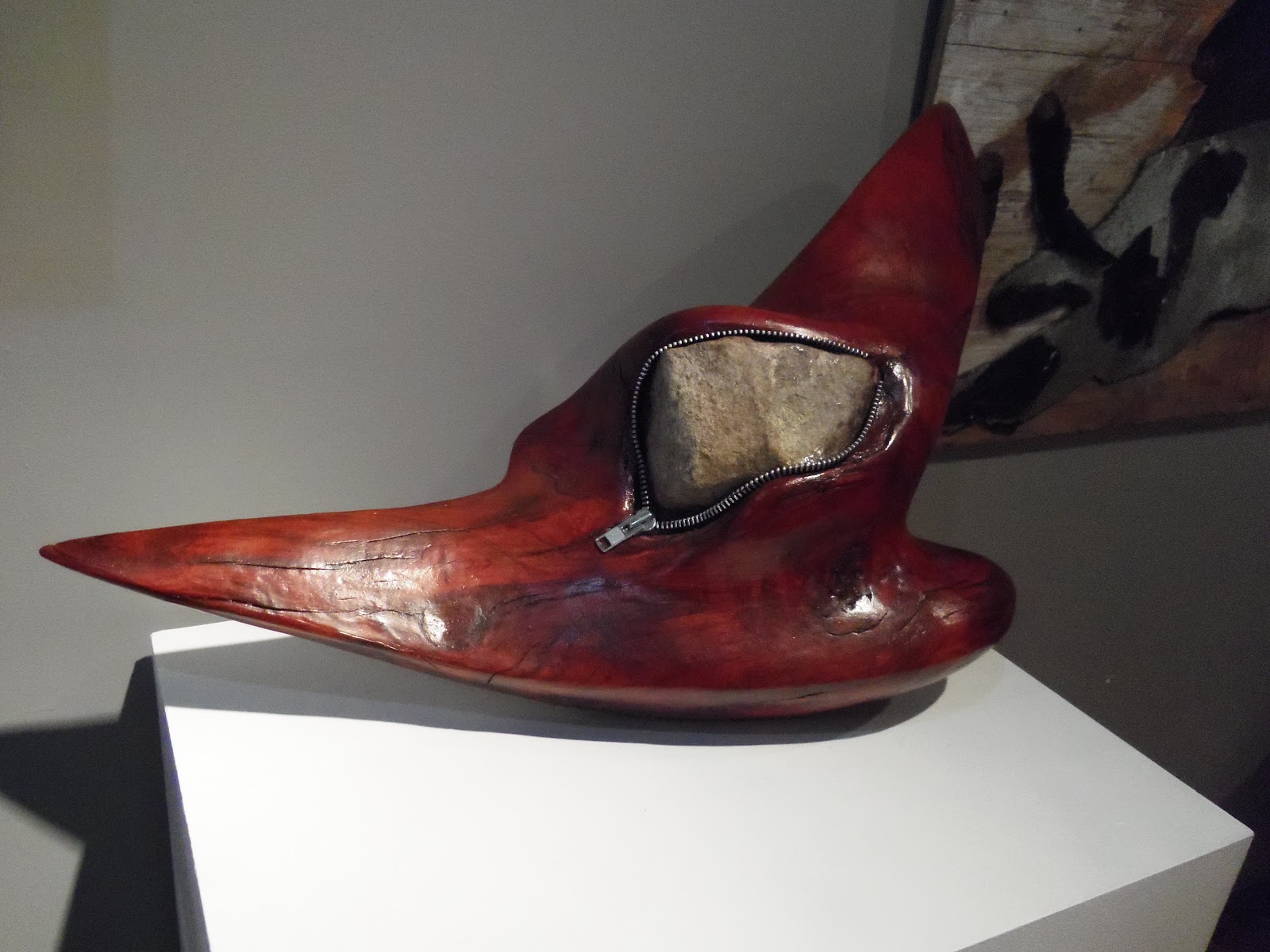 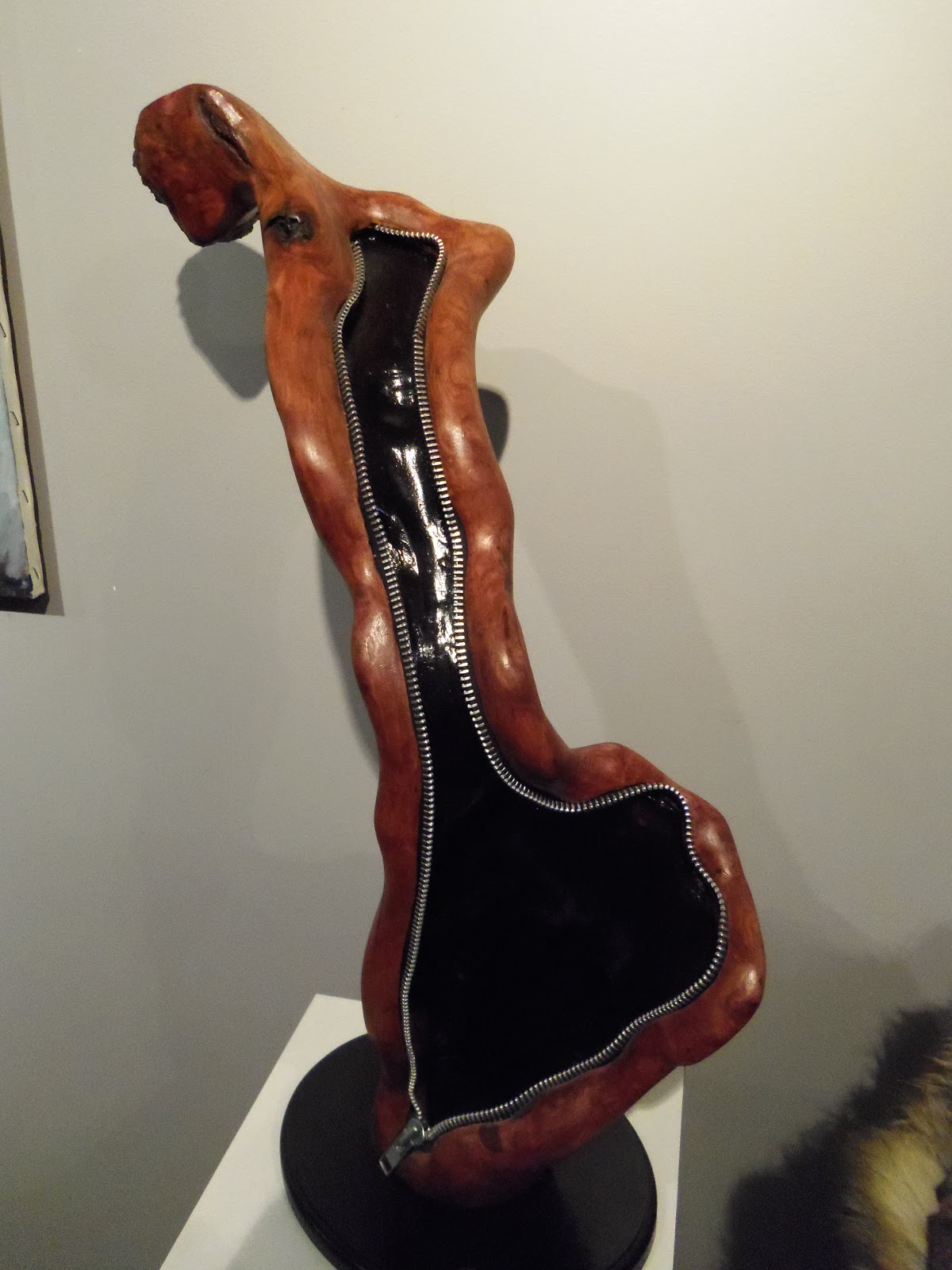 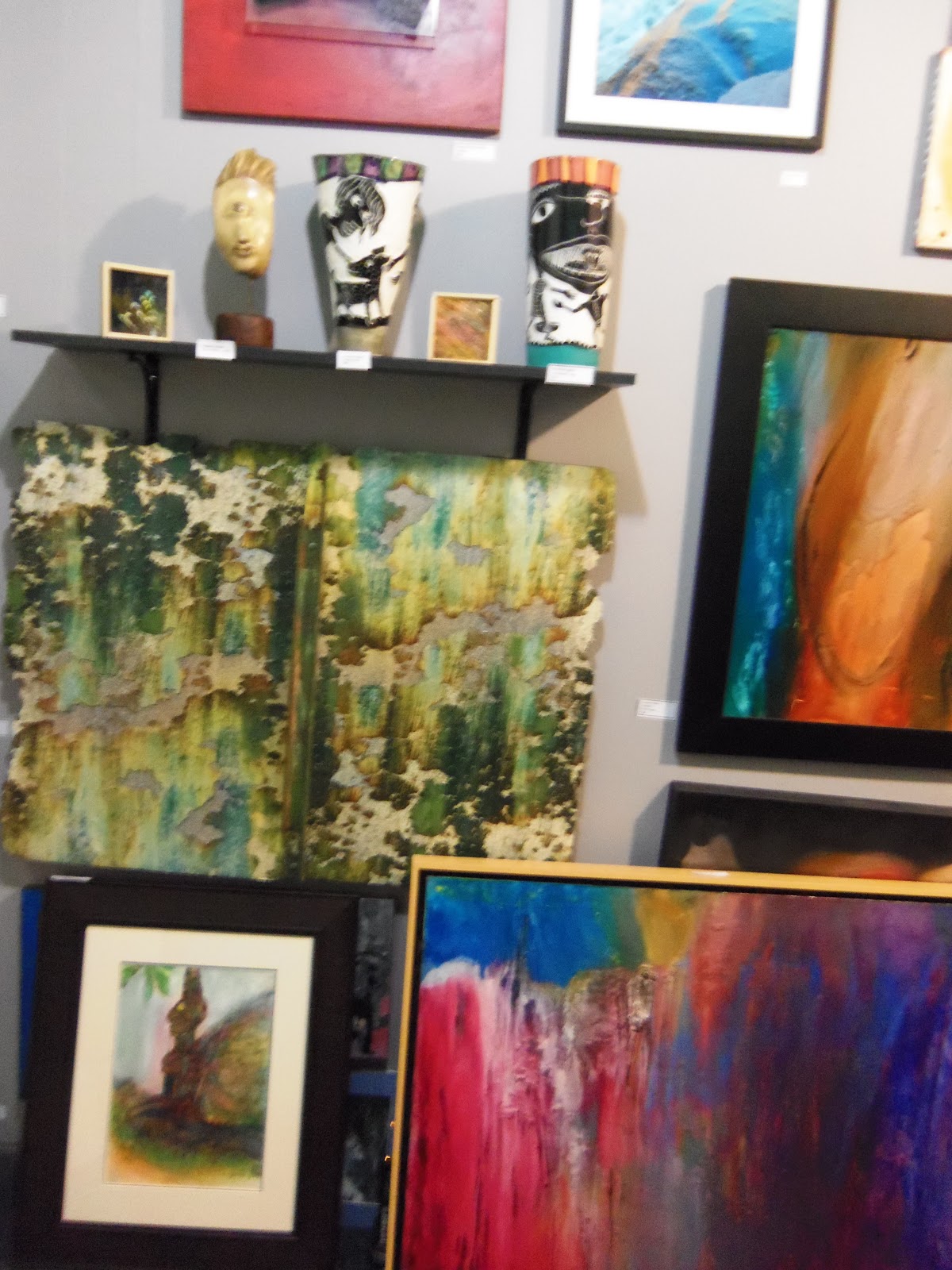 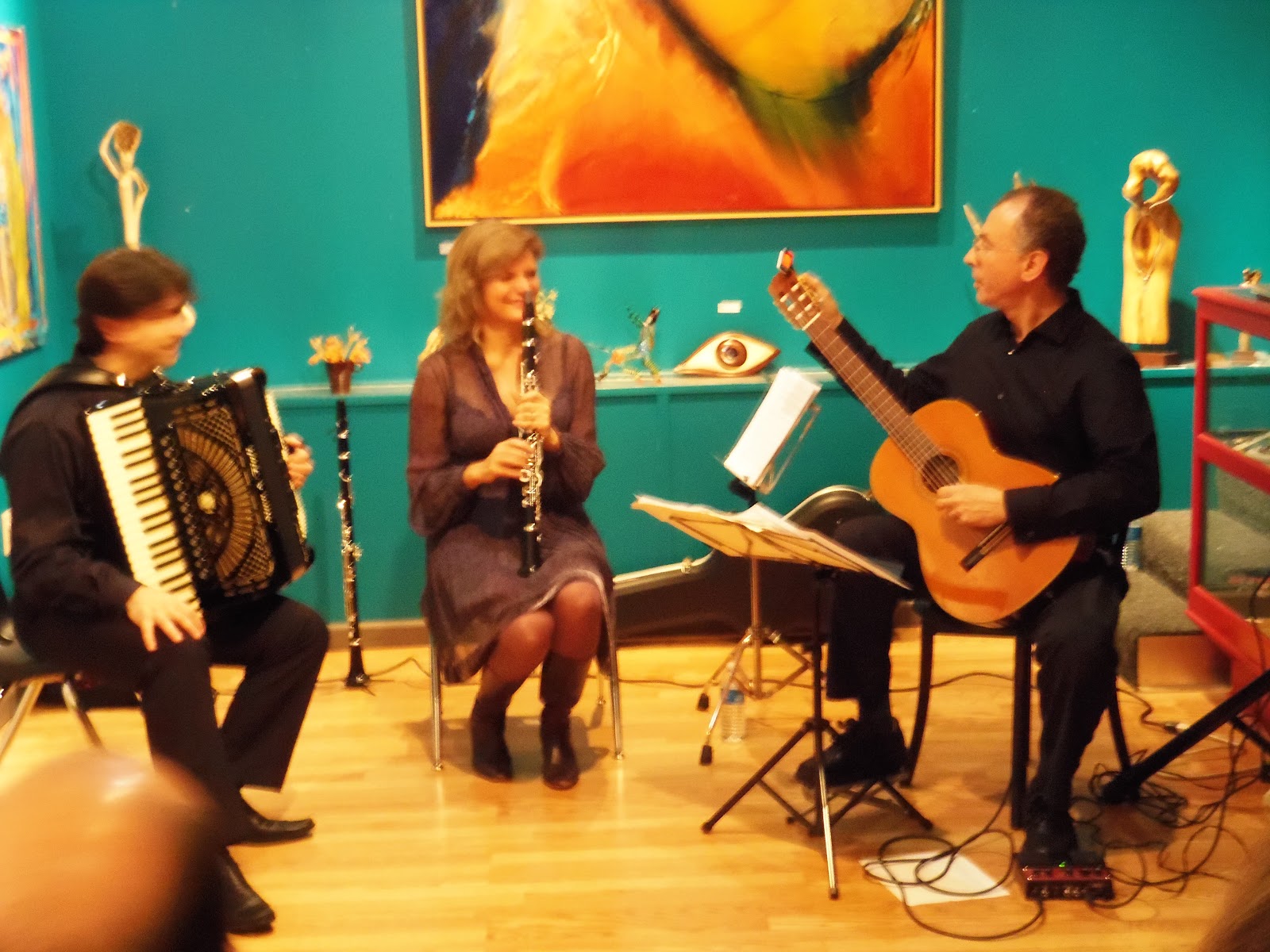 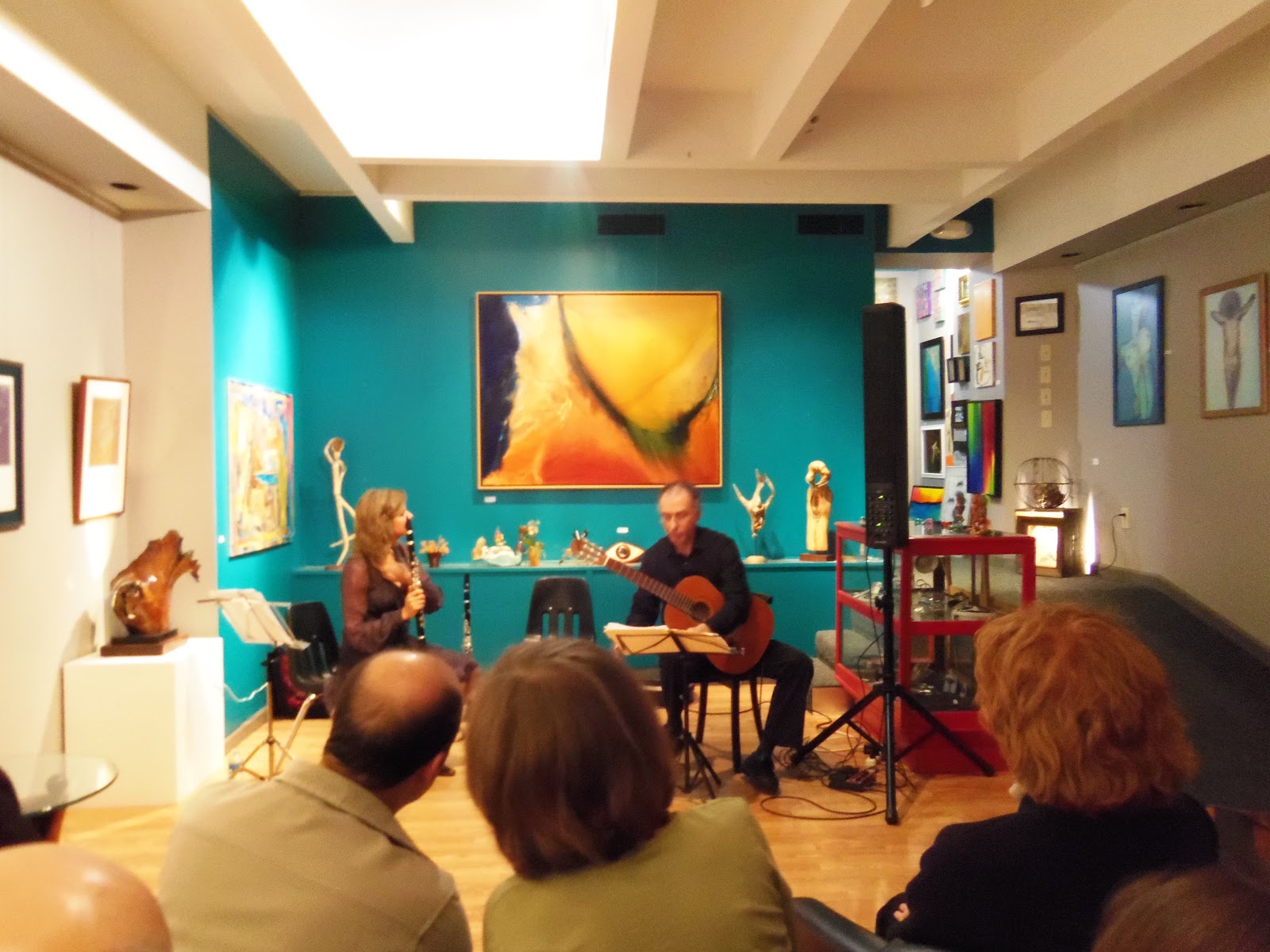 Susanne Ortner-Roberts on clarinet, John Marcinizyn on guitar, and Vladimir Mollov on accordion. Playing Klezmer and Gypsy Jazz. A packed gallery loved it. 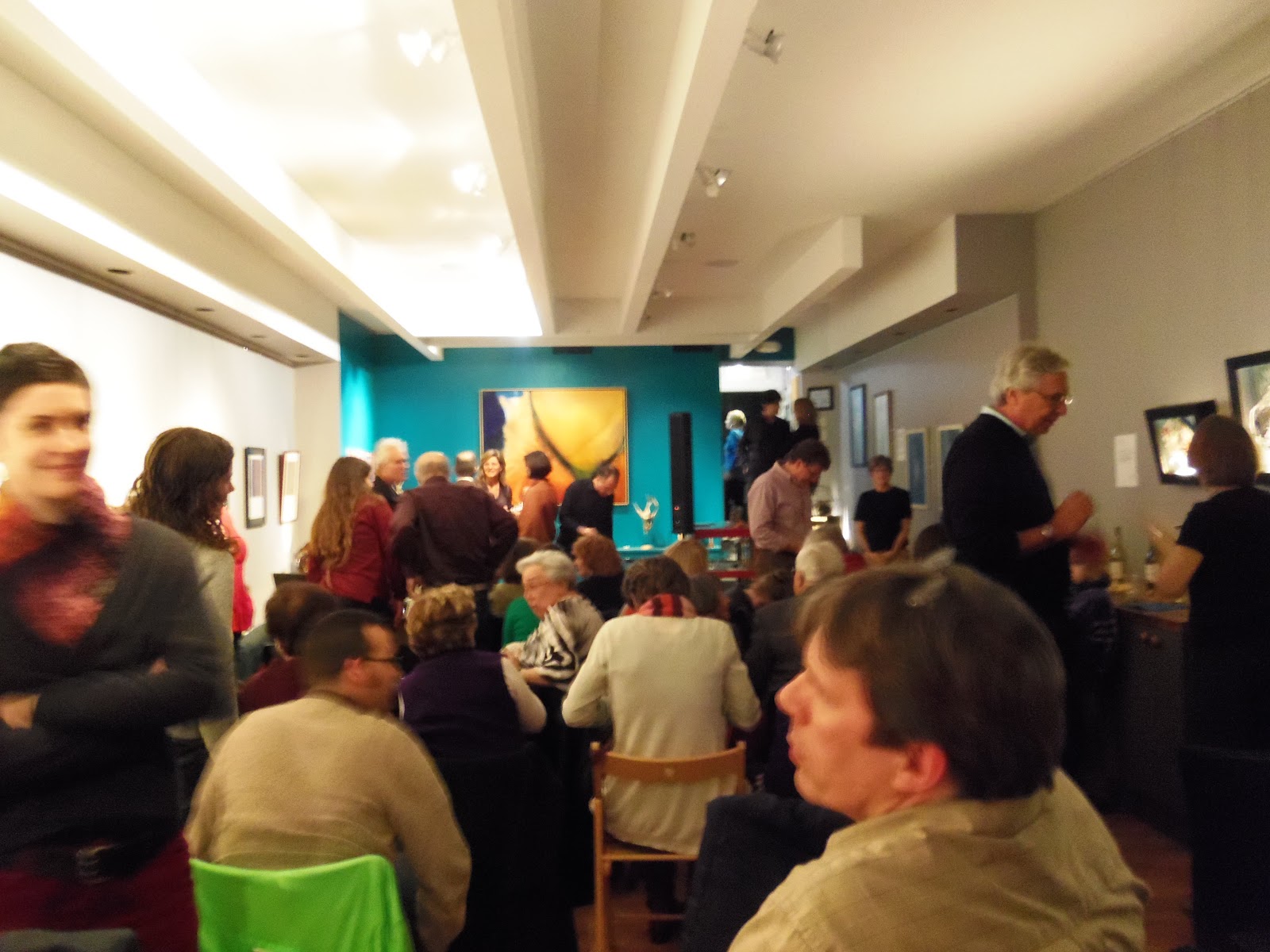 Posted by It's a Wonder-Filled World at 12:16 PM No comments:

PITTSBURGH -- It's 9:45 p.m. and we're home. But it's amazing Larry lasted as long as he did in today's tournament. He played for almost eight hours and never had more than a pair. In the last hand, he ended up going all in with pocket queens. The small blind, a guy who had just moved to the table, was impossible to read because he was impossible to see seated where he was. The guy called and had pocket Aces. And then the board gave him two more.


Posted by It's a Wonder-Filled World at 6:51 PM No comments:

Pittsburgh Poker Open -- and then there were two 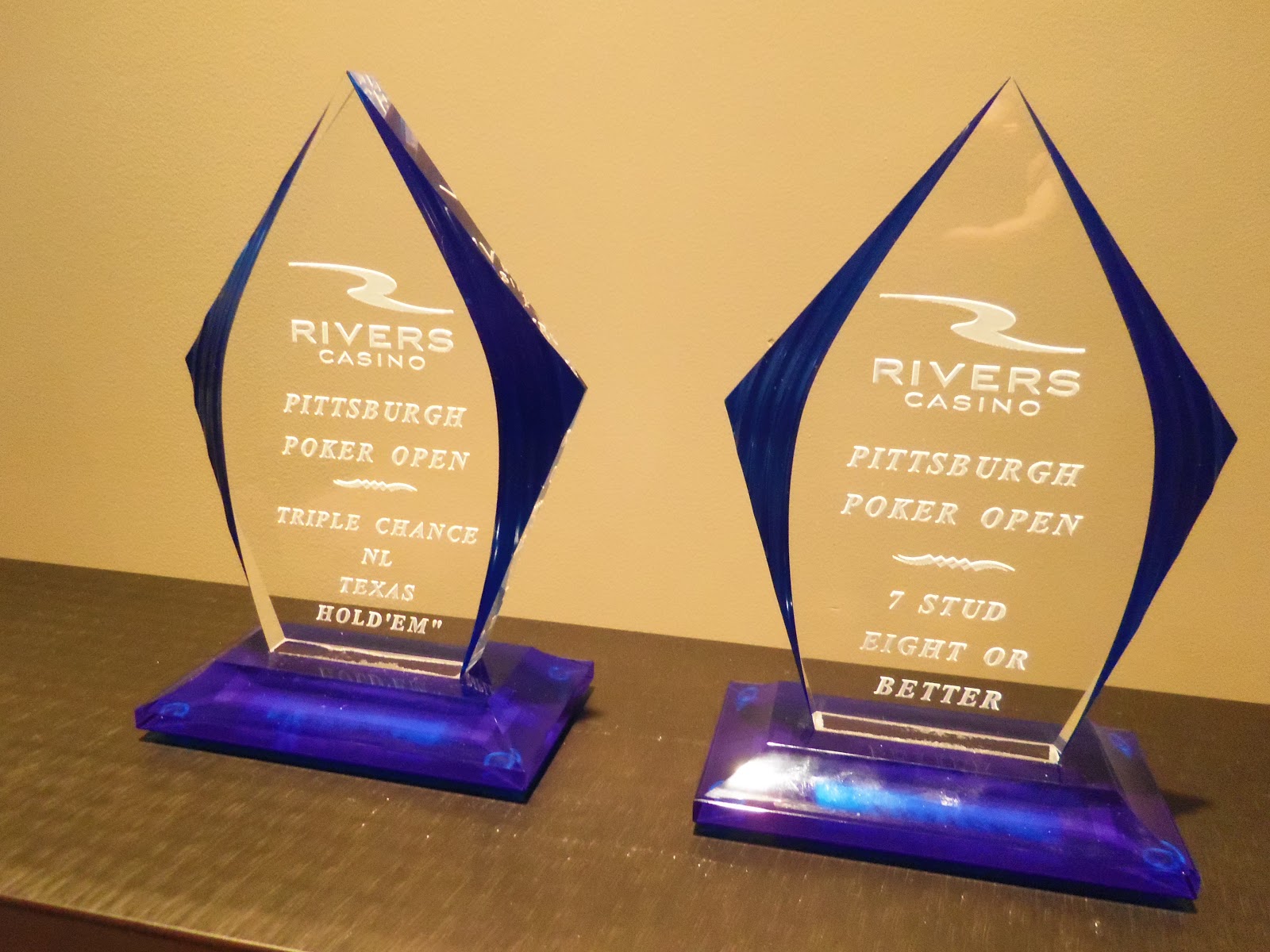 Larry won the second one on Thanksgiving day. Hannah and I were there cheering him on, and it was a riot.

The game was 7-card stud, eight or better. Larry taught himself the rules the night before. It's 2 cards down (to each player), 4 cards up (to each player) and 1 card down (to each player). A high hand and a legitimate low hand will split the pot. The low hand can't have a card higher than an 8, and it cannot include any pairs. So think junk hand. The best hand to get would be A2345 as a straight flush because it would be most likely the highest hand and also the lowest hand.

There were only six guys playing, and that was good because it takes a l-o-n-g time to play. With more people, it would have gone on for hours.

The poker room was virtually empty, one cash game only going on. So we pretty much had the place to ourselves. The dealers who weren't actively working were watching, too. At one point, a player flipped a card into the air by accident. It hit Hannah's foot and then the ground, and I picked it up. They have to take the deck out of play and count the cards. I get it. People do cheat. Just not me.

"Playing well. Getting cards. But getting killed on flops. 4 drives against my aces so down 35% of stack. But not giving up." 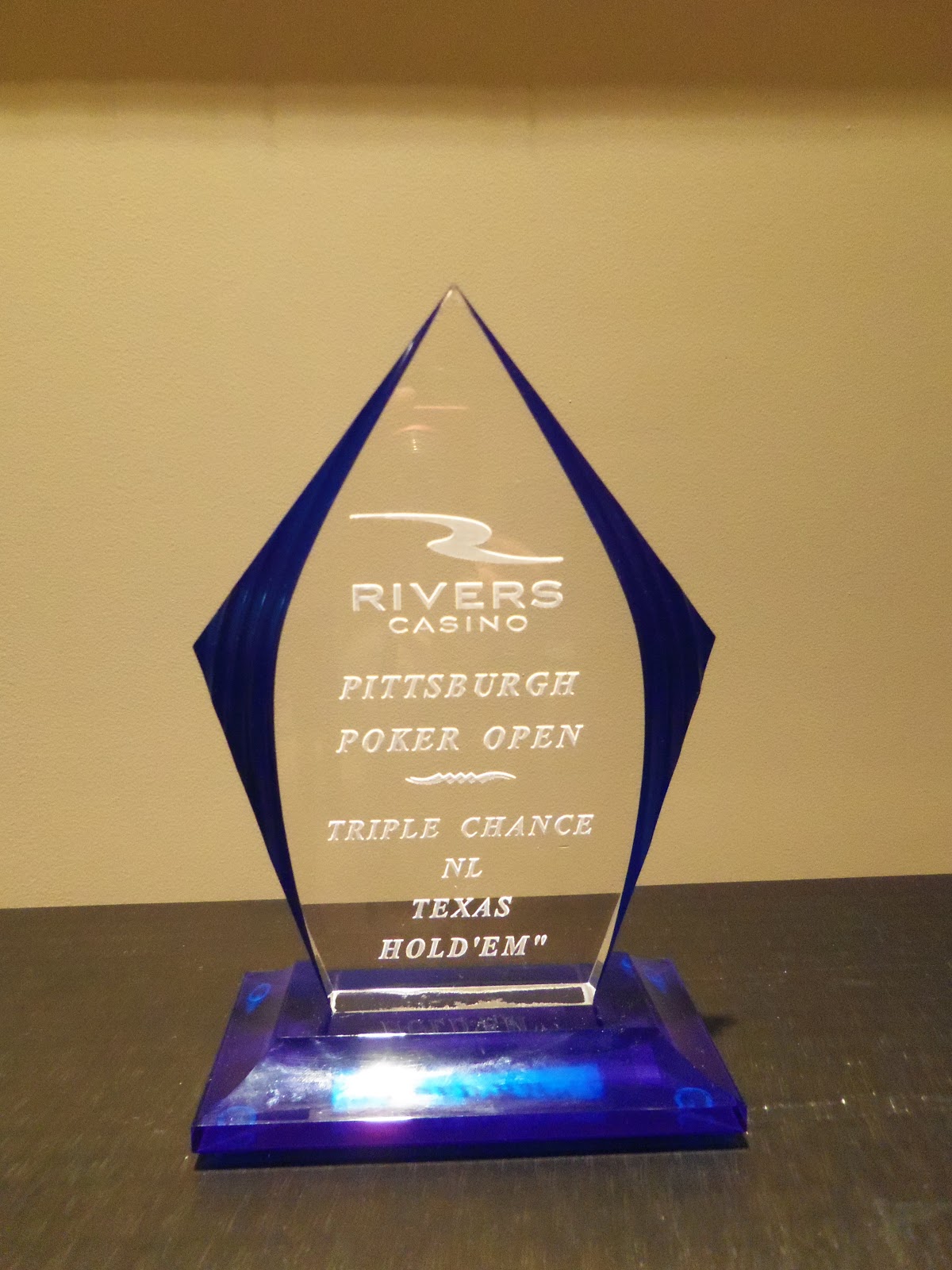 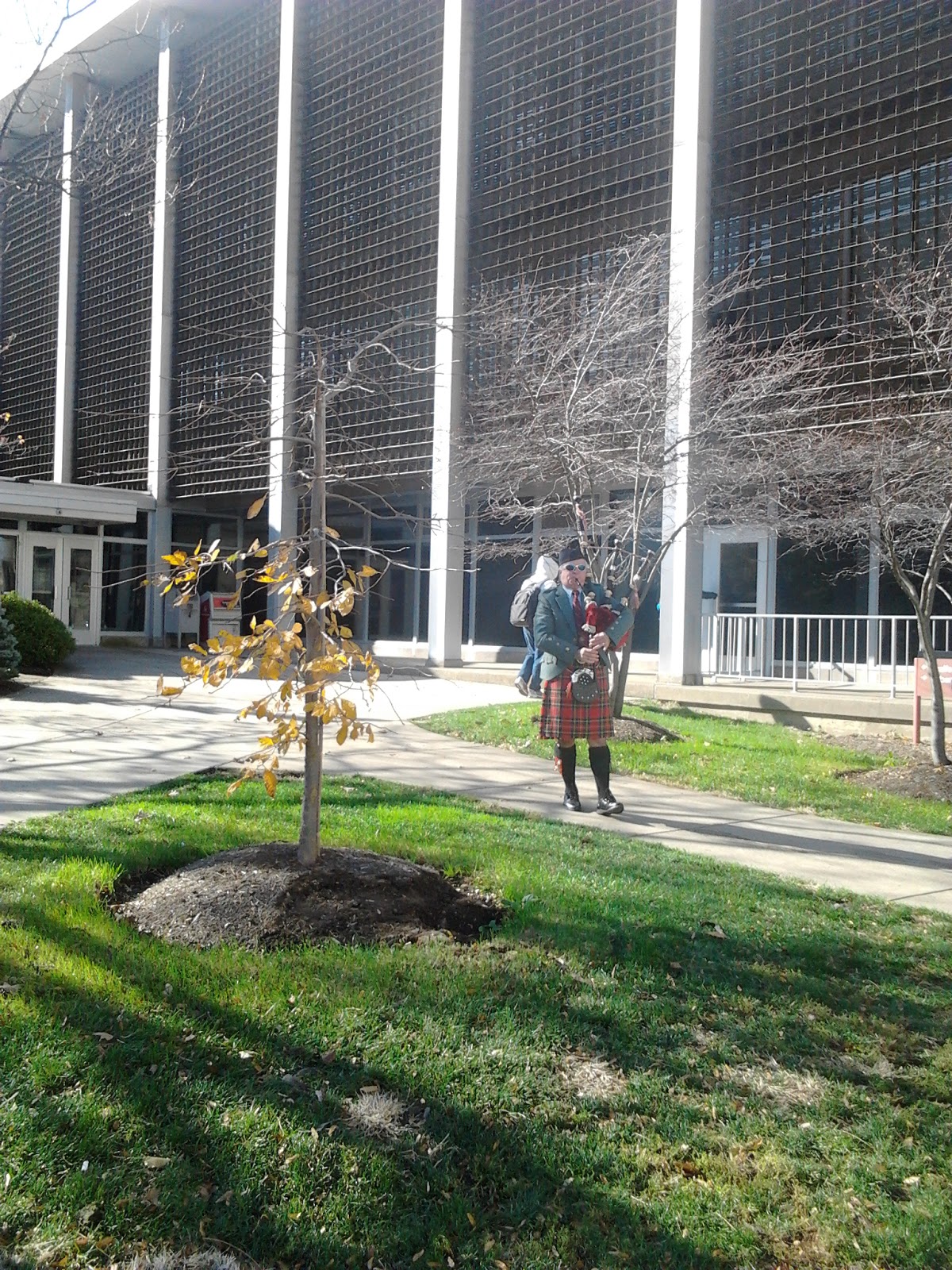 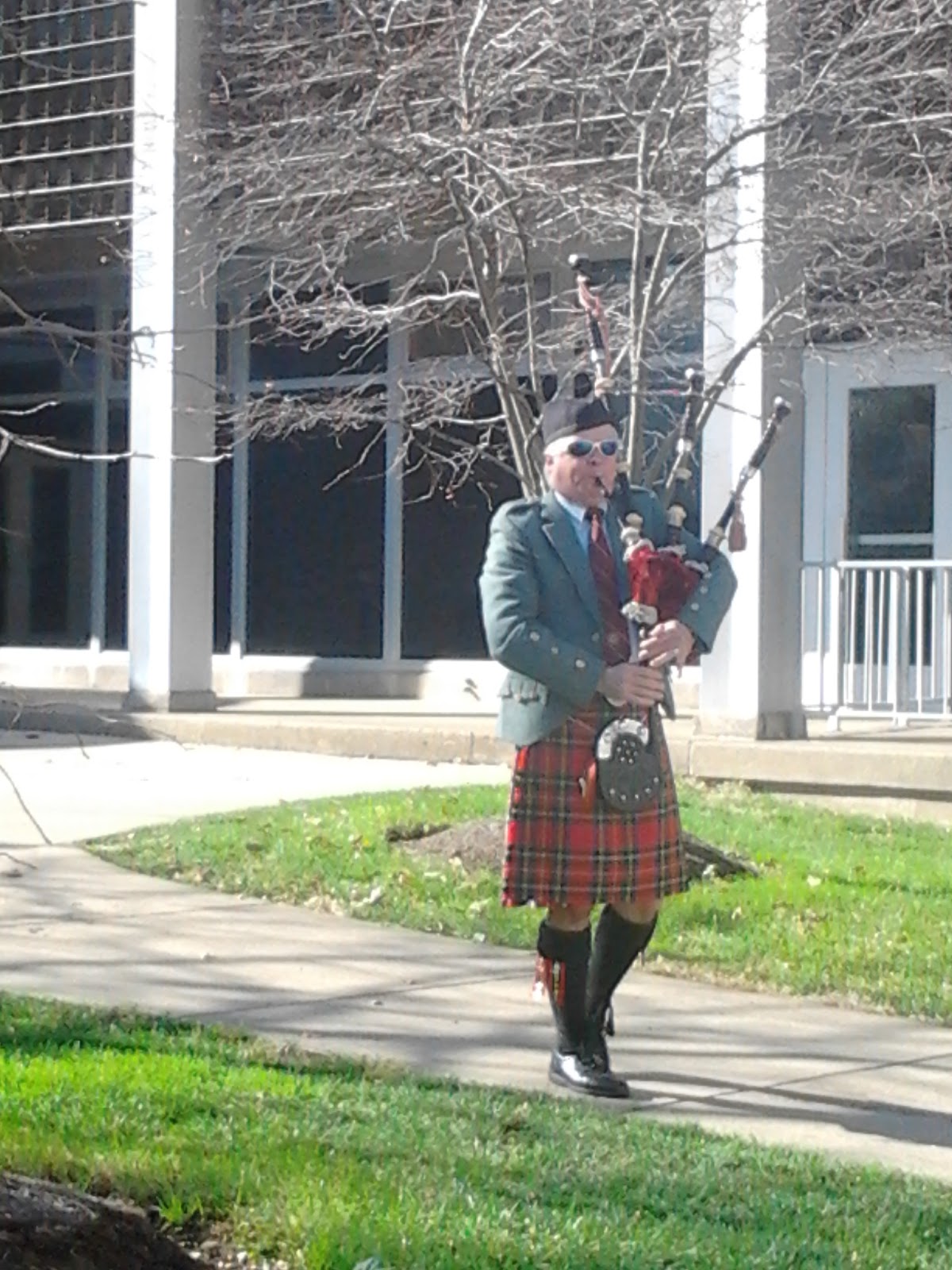 I didn't get a chance to ask this guy what was up. I assume he was there for a event that was about to start, but maybe he was just out for a stroll.

CMU offers a music degree in bagpipes! The degree, started in 1990, is the only one in the world and has graduated 3 students through 2009. (I can't find data that's more current.) Some students just take lessons. Because bagpipes are phenomenally loud, students practice in a sound-proof basement studio on campus. Maybe this guy just couldn't take the closed in space anymore.


Posted by It's a Wonder-Filled World at 9:24 AM No comments:

PITTSBURGH -- To Pittsburghers between the ages of 14 and 17, the Carnegie Museum and Library and the City of Pittsburgh are sponsoring an alternative homecoming dance this Saturday. It's for "Wallflowers and Wildflowers," any student who just might want a different homecoming experience.

Some random Homecoming photos from our past (hope you don't mind, Han): 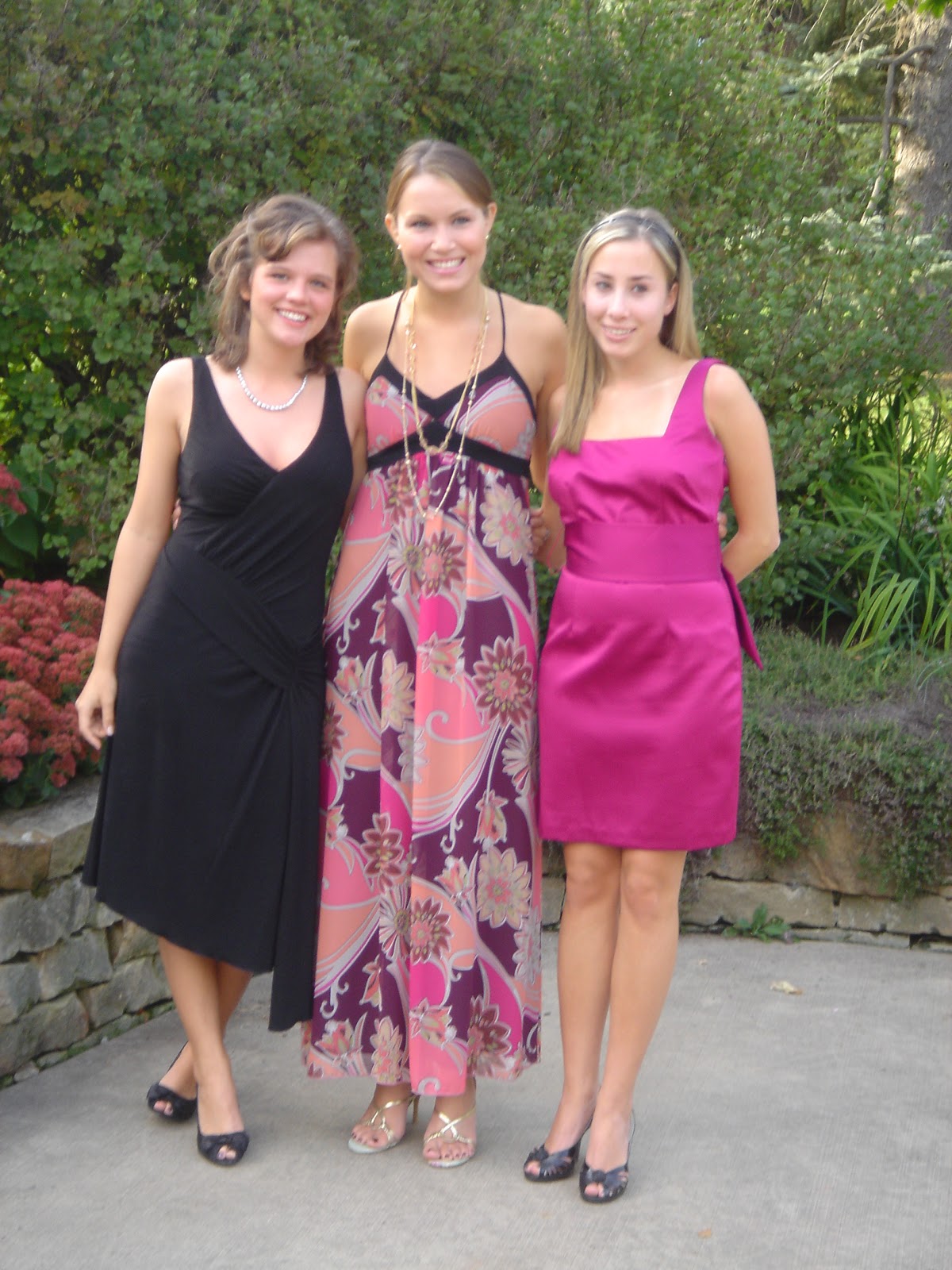 Posted by It's a Wonder-Filled World at 8:36 AM No comments:

Happy Birthday Eve to Our Kiddo

PITTSBURGH -- We'll be on the road tomorrow, so I want to send an early birthday blog wish to Hannah.

I wouldn't dare use cliches like "where has the time gone" or "it seems like only yesterday that you were born" or "how is it possible that you're 24?" I'll just say that we love you to pieces and you'll always be our little girl with the pony tails and the mischievous grin and the mind of her own. 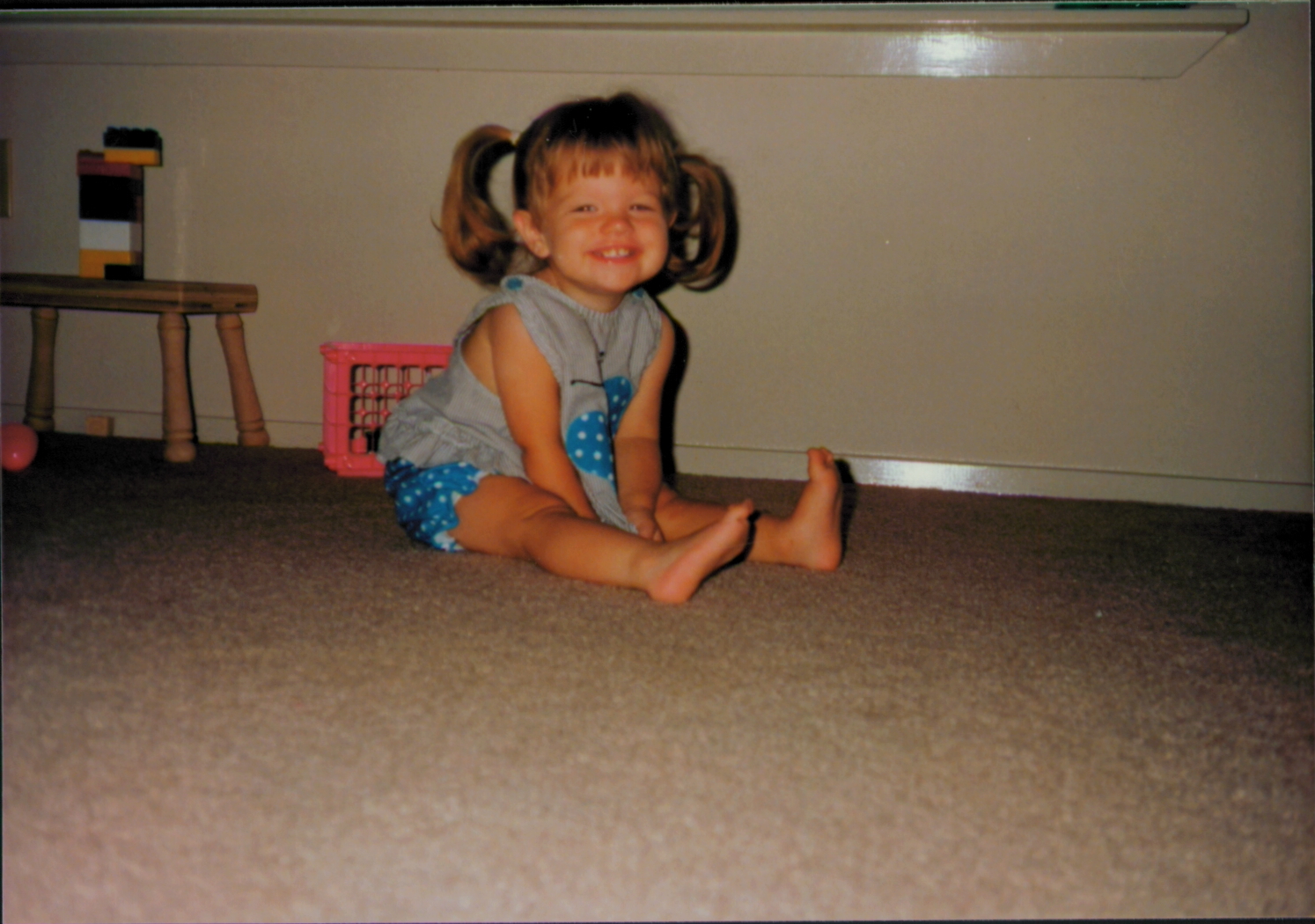 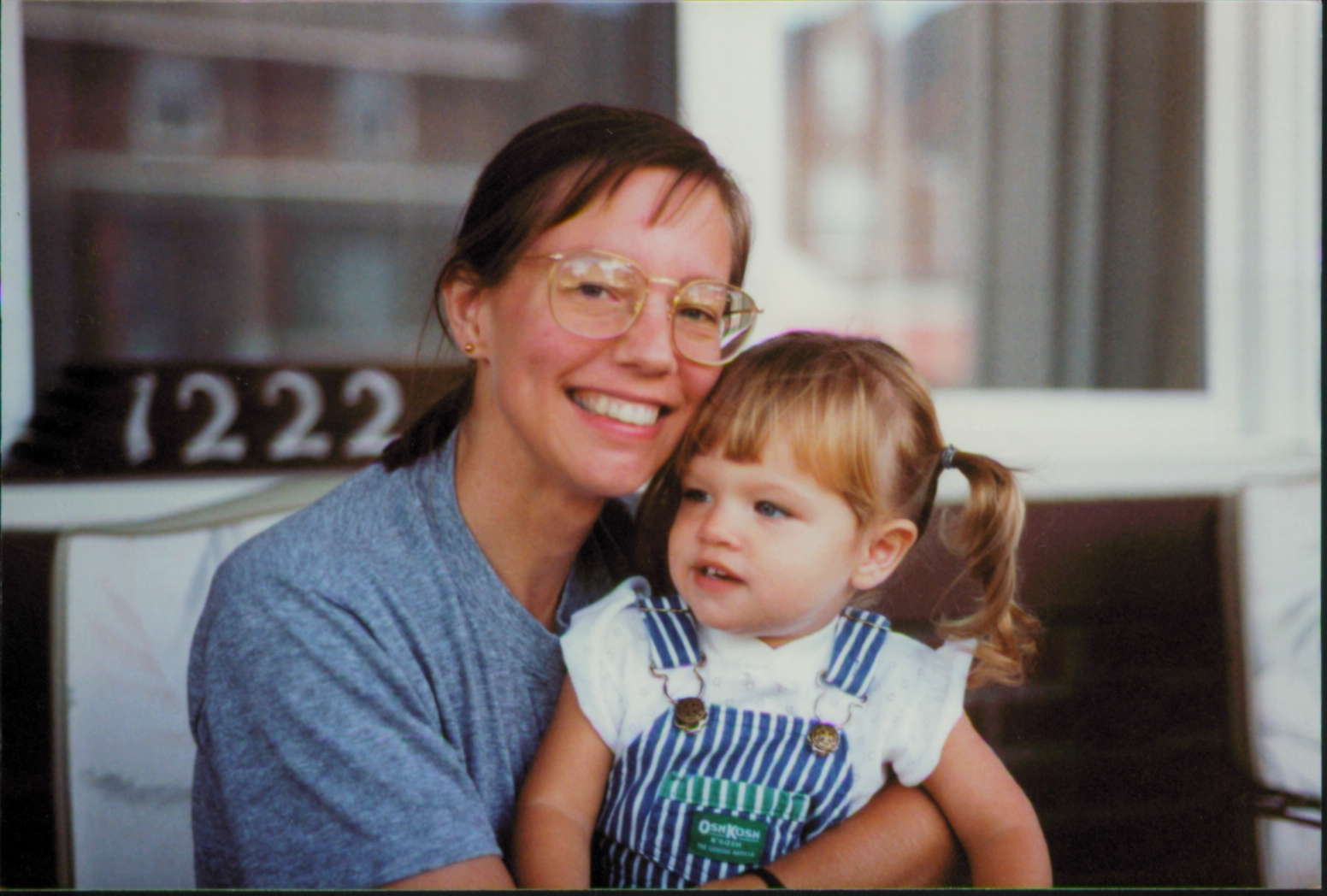 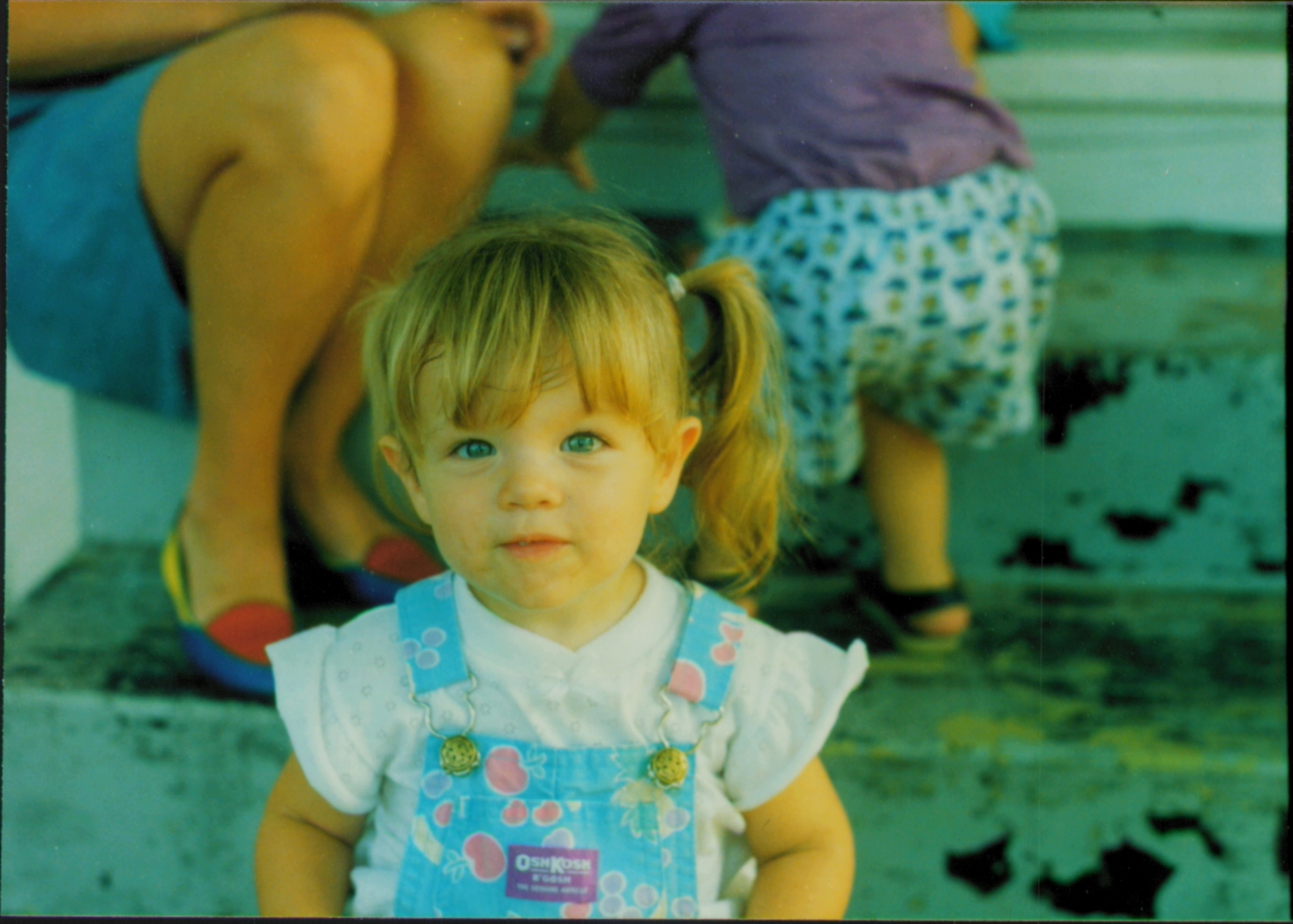 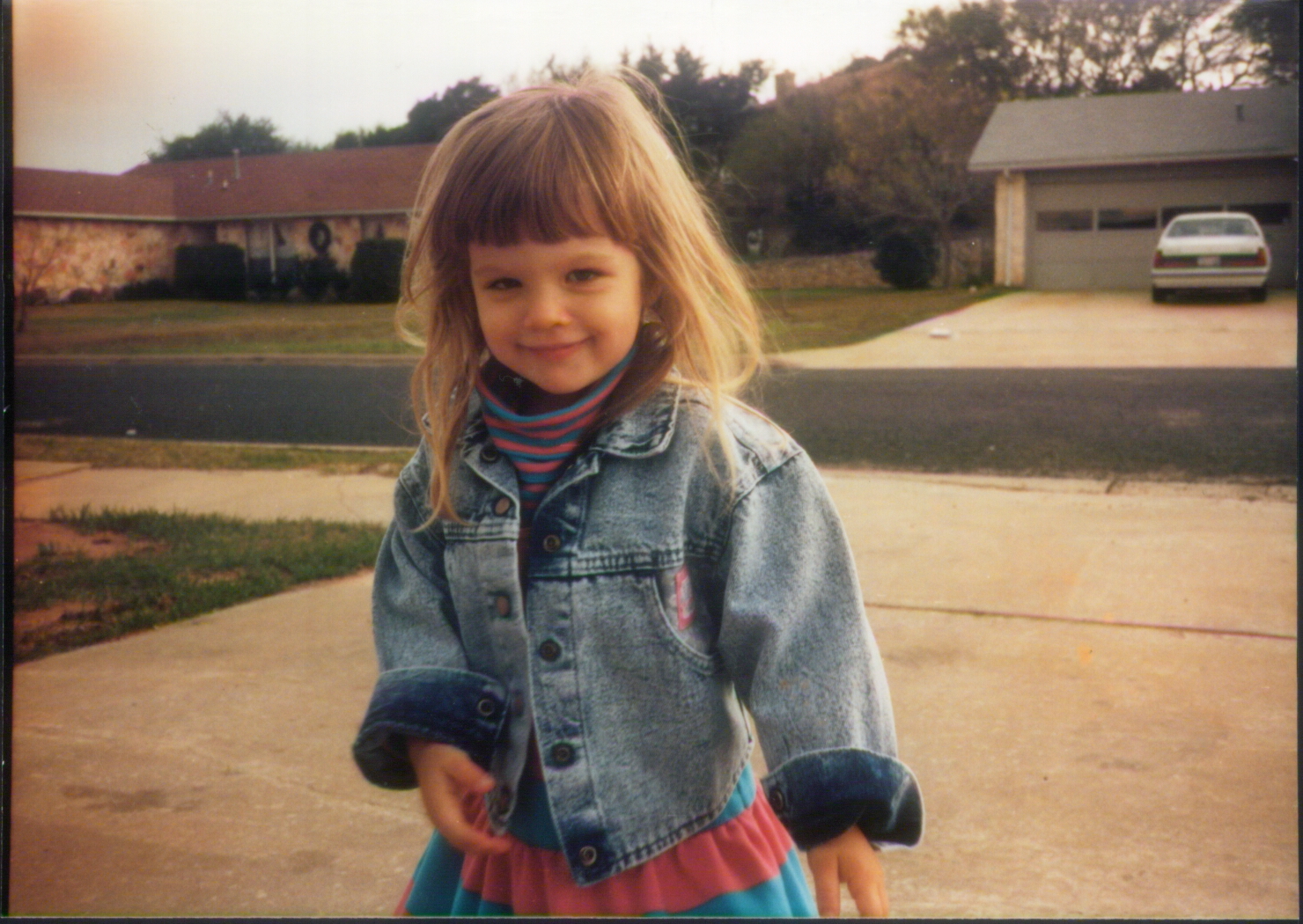