On to Day 2 for Larry at the Main Event!

After an earthquake during brunch, Larry started his day at the poker table with a group that included alcoholic-falling-down-drunk guy. DG wasn't just drunk but pickled. He wouldn't shut up, didn't know what was going on most of the time. By the end of the night (he bagged around 20k chips!) he had sat out a total of 4 rounds--an amount that nobody at the table had ever witnessed--and was on the cusp of being thrown out. For a while, he went all-in hand after hand. Nobody bit, until.... well, the guy in Seat 1 went for it after DG showed (tossed across the table) 2-5 offsuit. Seat 1 had 9-10 offsuit. You know what's going to happen. DG found three 2s. What a way to bust out. Sorry Seat 1!

When DG didn't show after the dinner break, rumor was that he had been arrested near the Mexican restaurant. But he eventually came staggering back, literally being held up by a friend. He said that he had been detained by security guards but talked them into letting him play.

We're going to shift away from poker today and take in some NBA Summer League.

Last night, we got to our hotel room just before 2:00 a.m. and watched a little Jeopardy to wind down. I was killing it. Here's to hoping Larry kills it on Day 2.

An Earthquake, the Fourth of July, and the WSOP Main Event

LAS VEGAS -- During brunch, we felt an earthquake. It rocked our table and the light fixtures in the restaurant swayed, but the giant mirror on the wall behind Hannah stayed put. It was a 6.4 quake centered about 220 miles from Las Vegas.

Onto the Main Event. 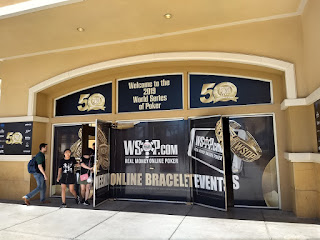 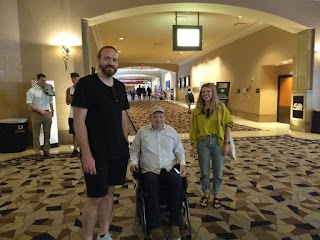 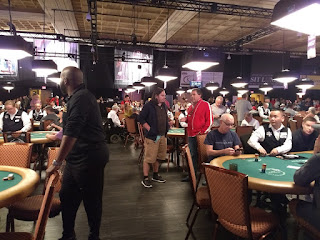 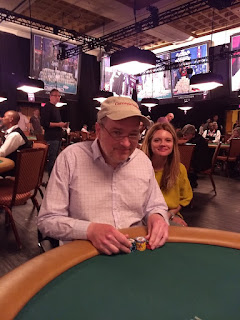 Daniel Negreanu told the players to not play dumb, and then it was time to shuffle up and deal. 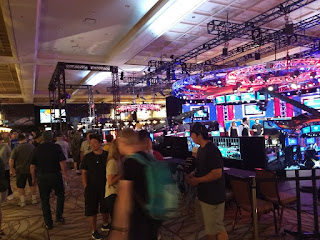 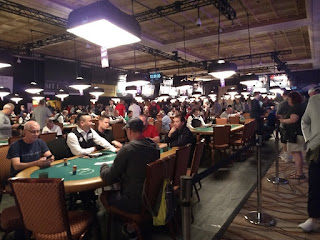 Posted by It's a Wonder-Filled World at 3:29 PM No comments:

A Traveling Show, and Tells

LAS VEGAS -- It's WSOP (World Series of Poker) Main Event time again! Even in the crowd of thousands, I see familiar faces. Larry has played in lots of cities, and a lot of tournament poker players follow the circuit, shifting as tournaments pop up at casinos around the country. But the biggest of the big events is here in Las Vegas.

The World Series of Poker in the U.S. (there are foreign WSOP events) is made up of eight-nine events, orchestrated by Caesers Entertainment Company, that annually fill every inch of the Rio Convention Center between May and July. Pot-Limit Omaha, Seven Card Stud, something called Razz, a Ladies Tournament.

But the bomb is the Main Event--No-Limit Hold'em with a $10,000 buy-in and no rebuys. One shot at the big prize that includes a coveted winner's bracelet and a huge payout. Last year that big prize was $8.8 million. Out of almost 9,000 players, Larry came in 311th.

This happened on Monday:

It was a Mini Main Event (buy in $1,000) that drew 5,521 folks. This was during the bathroom break. I estimate that 1/10 players are women, but probably fewer than that, so ladies, your bathroom situation is fine. But for the guys? I'd hate to see what the bathrooms look like after the break.

Because there will be so many players, the Main Event has three Day Ones. Larry will start play tomorrow, but the whole craziness started today. Here's the link: