LAS VEGAS -- Larry started out playing really tight. He even admitted he was nervous, which almost never happens. He was short stacked through the first 2 breaks (at 2:00 and 4:15) and up to the dinner break at 6:45. The room was much colder than when we had stopped by the day before, so I got him a jacket and his hat, and when he went back in after dinner, I could tell that his jaw was set. He was ready to play his own style instead of just hoping to hold on to make it to Day 2.

At the end of the night, they make them bag their chips (Ziplock bags) and fill out a form, the pink copy of which is the ticket to be able to retrieve the chips the next day of play. I asked the "floor" (the guy in charge of the tables in a certain area) if I could help Larry and he said no, I had to leave like all spectators. (They clear the room before the players leave at each break.) He said they'd help him. But they didn't. The guy sitting next to him was kind enough to do it. So L's going to have a little chat with them before play starts on Wednesday.

Many of the poker pros played yesterday. Doyle Brunson, age 78, and a poker pro for many many years, had posted on Twitter yesterday morning that he's been playing a lot of 12-hr./day cash tournaments and he was tired so he probably wouldn't play the Main Event this year. But then he posted that he was thinking about it. And by noon, he had tweeted that he was gonna play. He ended his day with 81,400 chips.

Exhaustion. I wore myself out (unlike Doyle Brunson), but that won't happen again. Now that we know the logistics. And the pressure is off since L made it to round 2. But we got back to the hotel around 1:30 a.m., and we were both awake at 6:15 a.m. Not normal for me. I don't like to miss sleep ever, for any reason, but the adrenaline is overwhelming. I'll nap this afternoon. If only Hannah and our doggie Bruno were here -- Hannah is a champion napper (I trained her myself), and Bruno was, too.

(This is the place where I get to throw in pix of my "kids.")

Massage therapists are available all day to work on people at the tables. They carry cushions with them that the player leans on against the table. 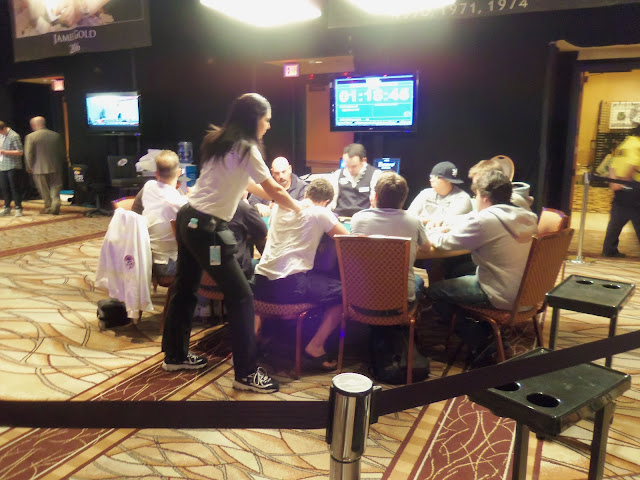 Professional poker players could cure cancer if they transferred the drive and concentration it takes to sit for 12 hours at a time, day after day, staring at the same 52 cards.

Posted by It's a Wonder-Filled World at 9:53 AM