RIO CONVENTION CENTER, LAS VEGAS -- It's 3:17. Play started at noon. The first break was at 2:00. Some thoughts in no particular order:

I was nervous. I'm still nervous. I hear other spouses and spectators saying the same things. But the players seem pretty calm. Eating at the table, chatting.


Larry has about an average stack. He lost the last hand before the break. His table is back in a quiet corner. 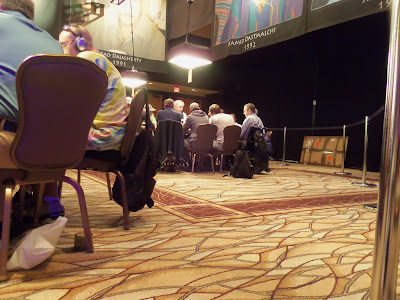 The break. About 6 minutes before the break, the announcer tells spectators that they must leave the rooms. The players have 20 minutes only, and it's pandemonium, especially the bathroom situation. This is one attempt at alleviating that problem.

When the spectators leave, they, well, go to the bathroom. That clogs up the works. Wouldn't it make more sense to have spectators stay in the rooms until all the players have had a chance to go first?

Jason Alexander is at a table near Larry's. I think I saw Jennifer Tilly and Ben Lamb in the crowd.

Here's Antonio Esfandiari (under the P in ESPN), who just won $18 million in the million dollar buy-in. It's obviously about the game to him even more than the money. This is the featured table. 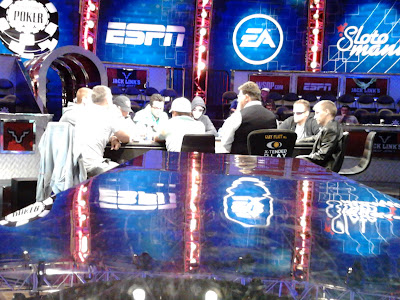 Don't know why my photos are so lousy. I'd ask my tech assistant, but he's busy right now.

Going back in. As long as I don't get a text, that means Larry's still in.

Posted by It's a Wonder-Filled World at 3:36 PM