Do You Hear What I Hear?


PITTSBURGH AND CAMBRIDGE, Ma. -- I almost ran over a young woman jogger. I was pulling out of a parking lot at Carnegie Mellon when she popped out from behind this sign and dashed right in front of me. 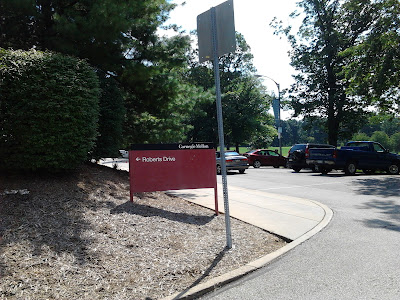 While I sat in my car attempting to absorb a sudden flood of adrenalin, she jogged merrily down the street, ear bud wires hanging from both ears, oblivious to that fact that she had just been spared a really bad day.
I took a deep breath, pulled out and drove beside her, willing her to look my way. Nothing. She turned right, toward the Carnegie Library. I drove past her and pulled over, waving my arms. She saw me and slowed down, tugging on her ear bud wires. Pop, the first one came out, and then pop the other one.
I hoped my voice would sound calm and rational, not loud and crazed. No luck. “You ran right in front of my car! I almost hit you!” She looked confused. I pointed to the ear buds in her hands. “Take those out when you run. You need to be more aware!”
“I’m sorry,” she said, not just to me but, I think, to her potentially flattened self.
Part of the reason I reacted so strongly is because a few years ago, the minivan I was driving through Squirrel Hill was totaled by a driver wearing headphones. The driver’s brain was so shut off from the fact that she was actually driving that she “didn’t see the stop sign.”
Plugged-in people cause accidents and nearly get smooshed every day. Those are two pretty good reasons to at least cut back on headphone usage. But another reason is the sounds of the natural world that might never be heard. Like the song stylings of a mockingbird. Have you ever heard a mockingbird? Believe me, you would know it if you have.
Just after sunrise in Cambridge, Massachusetts, I heard the bird outside my hotel window singing like a star in a Broadway show. Using clear, strong projection that CMU voice majors would envy, he’d repeat a 3-note ditty then maybe a 4-note stanza or a series of runs. Add in a trill, a scale, a frog. A frog? Sure, why not. Mockingbirds repeat what they hear, and since they don’t wear headphones, they hear a lot of critters.
Mockingbirds aren’t just about sound; they’re about a complete performance. 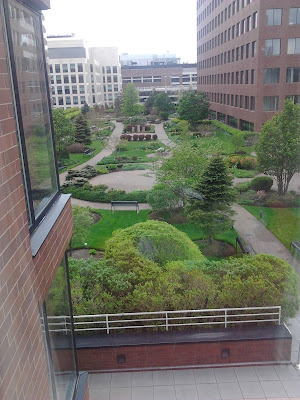 For this bird’s solo, his opening stage setting was the tippy top of the pine tree in the photo, swaying in the early morning breeze, where he harnessed the acoustics provided by the buildings on all sides. As he came toward the end of his repertoire, he dove from his perch, white wing stripes swooping past as he circled his tree, heading for the tallest building in the complex. 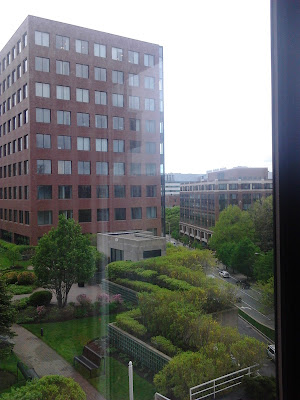 On the windowsill of an upper floor, he let loose three repetitions of a piece of bird music. Dive. Swoop. The next higher floor. The sounds of crickets, amplified. And then, the pinnacle. The top most extreme corner of the building. Like a figurehead on the bow of a ship, he leaned forward, scanned his world and then let it rip. Like a fireworks finale, he threw everything he had into one long bird-song sequence. I expected him to end with the piccolo solo from Stars and Stripes Forever.
Who wouldn’t want to hear that? And to think that I was about to plug in my own ear buds to listen to music in my hotel room. I would have missed the performance of a lifetime.
Sometimes it’s okay to lose yourself in headphoneland. Like when you’re sitting on a plane or a bus or a train, or you’re waiting on a park bench for a friend who’s always late.  But jogging anywhere near cars? No. And driving? Are you nuts? Anyone who has ever worn headphones or ear buds while driving, surrender your license right now.
I’m begging you, please unplug when you and your brain need to be aware. It might save your life. Or mine. And a mockingbird needs his audience.

Posted by It's a Wonder-Filled World at 6:24 PM